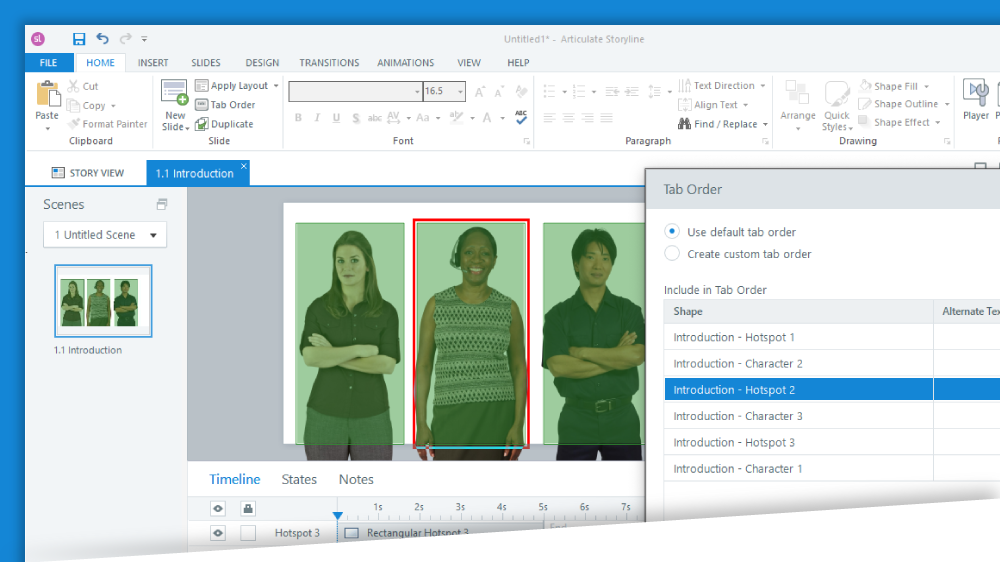 Posted at 10:21h in The Learning Blog by admin

The first month of 2020 brings with it a substantial update to the accessibility features of Articulate Storyline 360. The changes relate to both the player and slide content. In this post we’ll take a look at these additions to find out what they mean for end users.

The Storyline 360 player is now referred to as the accessible player. Both Modern and Classic player configurations have benefitted from a number of improvements.

Articulate states that this update allows learners to use a broader range of screen readers across more web browsers and devices. They also claim more screen reader features and improved player controls.

Previously, Storyline 360 solely indicated JAWS as their preferred/supported screen reader. This has been expanded to include NVDA, VoiceOver (for Apple devices) and TalkBack (Google’s screen reader for Android devices). The greater choice of screen reader options, including open source and device-embedded options means that the learner has broader scope to consume content on their own terms via their preferred device.

The skip navigation shortcut – which allows the learner to return to the first content object on a slide without tabbing through the player elements – is now visible when in focus. This provides context for sighted learners who are navigating with keyboard. Previously the skip navigation feature was announced by the screen reader without any visual cue, which may have caused confusion. The new visible shortcut can be disabled if required.

The accessibility focus rectangle allows learners who are using the keyboard for navigation to see which object is currently selected. The colour of the rectangle can now be changed from its default yellow to any colour more fitting with the course design.

Numerous other improvements to the player include the addition of keyboard shortcuts and the labelling of controls. Read the Articulate support document “Storyline 360: The Accessible Player Makes Navigation Easier”.

Articulate has also made some adjustments to how slide content is consumed by both screen reader users and keyboard navigation users.

Both screen reader users and keyboard navigation users will see significant changes to how they previously consumed Storyline 360 generated content. The aim of these changes is to reduce the number of keystrokes required for these user groups. Developers must still set the tab order as normal but changes to the subsequent end user experience are outlined in the use cases below.

The key change from previous Storyline 360 functionality in both cases above is that text and images are now essentially grouped and treated as one object on a slide. The tab and shift+tab functionality now moves the user through interactive objects, rather than individual slide elements.

Other improvements to how users encounter and consume content have been driven by the fact that every element on a slide is now rendered as HTML, following best practice for web accessibility. The most significant outcome of this change is that hotspots and drop-down lists are now keyboard navigation accessible. Read the Articulate support document “Storyline 360: Slide Content Is More Accessible”.

The Learning Rooms run workshops for organisations who need to build accessible Storyline content. Contact us for more information.